One of my concerns on moving to Japan was how to get my hair cut. My hair needs are not so elaborate but just having a basic conversation about hair seemed beyond me. I wasn’t so worried about getting about getting a bad haircut as, let’s face it, I don’t have very much hair. I was more worried about getting into a difficult situation were any hair related debate broke down into awkward silence. As a fear this is not implausible. Anyhow, I did a bit of research on hair related terms particularly the Japanese word for clippers (important if you have as little hair as me) and potential barbers that would do a haircut without much fuss (read: neck massages). I ended up with my hair a little shorter than I would get it cut in the UK but nothing too bad.

On the way out of the barbers I came out to find these guys making their way down the road. 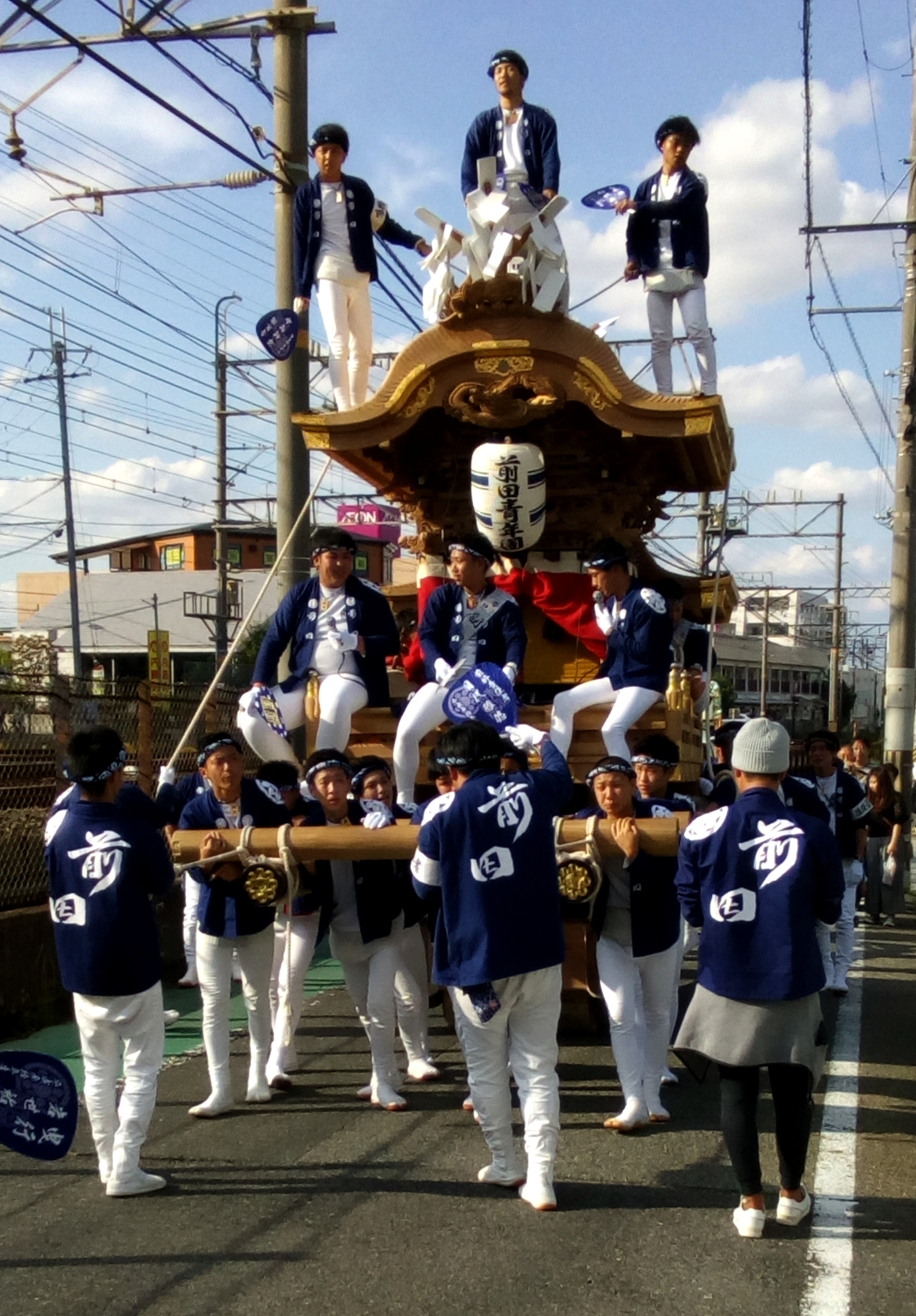 They were part of the Danjiri (Moon Viewing) Festival that is held all over Japan. I was stuck behind them as they made their way along a narrow road. I thought I would follow them for a bit until I could get past and take some photos. While I was following them an old fella who was part of the group pressed a can of beer into my hand (I didn’t have much choice in the matter) so I only thought it polite to follow them for a while.

I became apparent that quite a few of them were drinking and part of the festivities was to rock the float from side to side (hence the ropes on the side). There were also preceded by girls in a similar dress but whose costume also included a wet perm. Coming alongside of them I was able to take this picture:

The guys on top are no longer standing up. This is because they are about to cross a level crossing and if they stand they will get stuck in the overhead wires. In fact, they go so close to the wires that I think the electricity must be switched off between trains. You can see a few of the girls in front. All the while they are singing. I tried to make a recording but it didn’t come out too well:

I ended up following them all the way to the Shinto Shrine were they had come from. 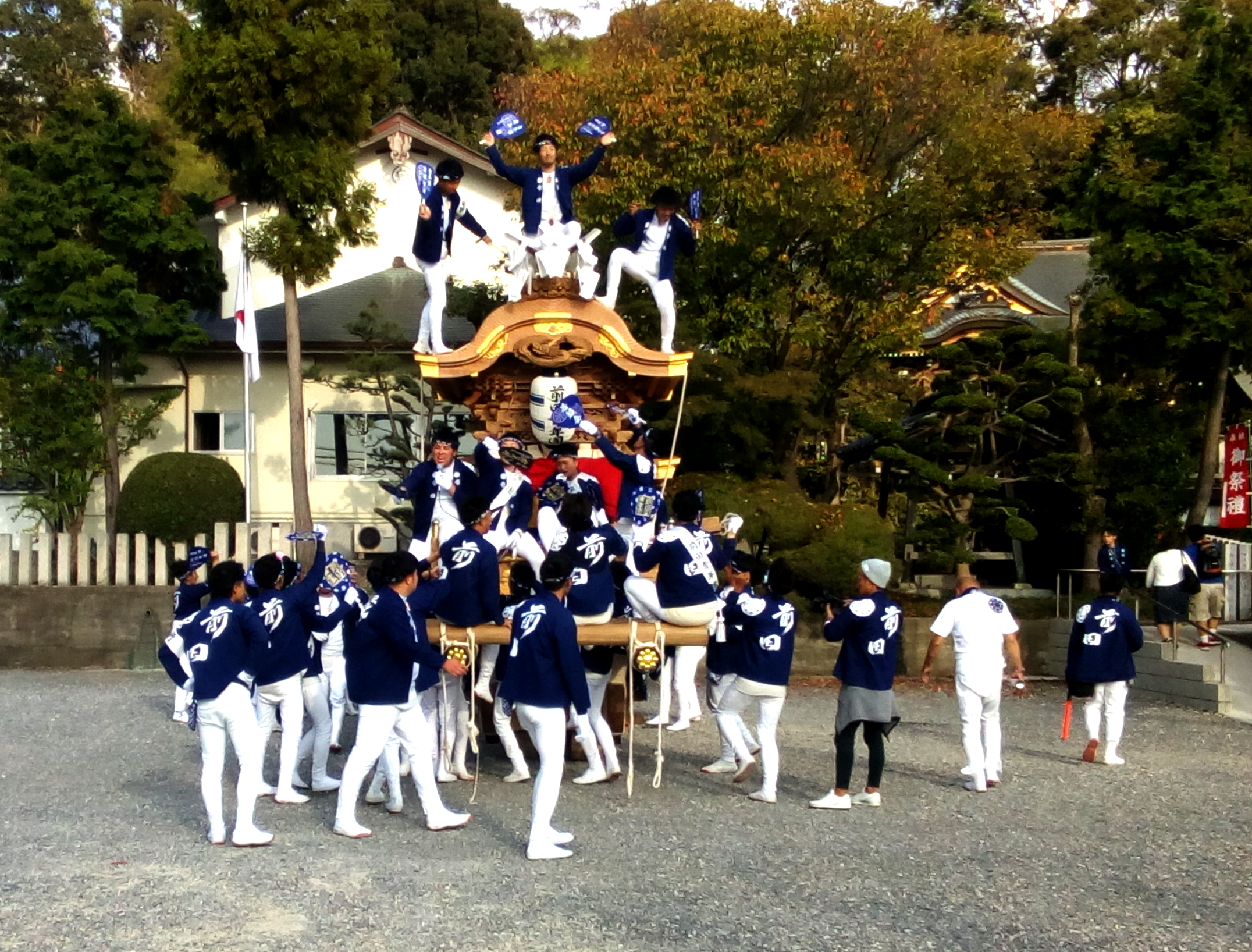 I left them there to continue their moon viewing (in the middle of the day).

The next day I was lazing in bed when I heard some singing coming down the street, Another Danjiri float was doing the rounds. The closest thing I can think of from the UK is when a Father Christmas float used to come down the road in December collecting money and handing out sweets to the kids. It was always kind of unexpected and was like the start of Christmas as I stood there in my Spiderman pyjamas waving to Father Christmas as he passed by sat on the back of a lorry.

That same evening I decided to get a breath of fresh air only to hear more singing on the breeze. I followed the sound and it turned out to the Danjiri group from the other day. Now it was dark and their float was lit up. The following picture doesn’t really do it justice. 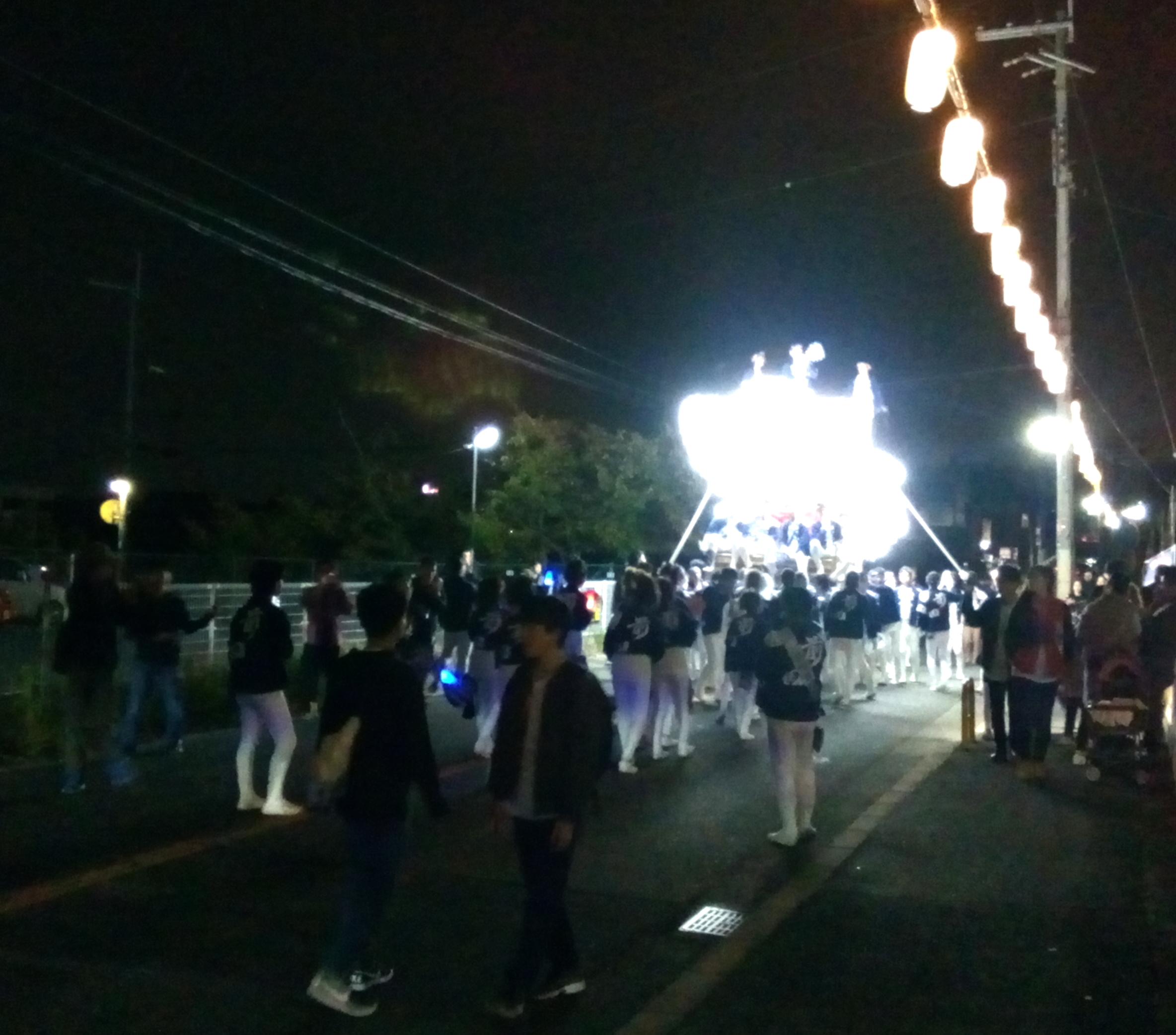 I followed them but they didn’t go too far. They appeared to end up parking the float outside somebody’s house. I’m not sure what the neighbours would have been thinking. I actually saw some larger floats at a parade the next week. The ones in this post were on wheels. The larger ones were actually carried in the shoulders of a large group of young men. I’ll post some pictures of that parade when I get the chance.